Ok, I guess we aren't doing our job! 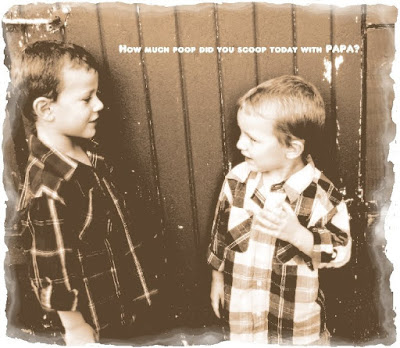 A few days before these two grandsons were coming to visit Nana and Papa, (for a week) we received a phone call from their daddy. They were having a little fight over who was going to get the pooper scooper and if there was going to be enough poop to scoop at Nana and Papa's house. I guess we are remembered more for the poop at our house rather than God's word...so in saying that we have some work to do because I guess we aren't doing our job!

Sure is funny, these little guys think it's so fun to help Papa scoop poop. However the big guys we work with, would rather throw the poop at Jim (which that has happened before) when he tells them they have to scoop poop for their nasty actions they just had.

Stop on over at Internet Cafe Devotions and enjoy some more WFW!

Trying to follow God's Orders,
Posted by MIracles Can Happen Boys Ranch at 12:43 AM

awww, they are cute grandson's!

I won't fight them for scooping poop lol. That job can be all theirs! :D

THIS is awesome....what a poignant message amidst the "pooper scoopers!" Do we bring our "poop" to the Lord?? It's got me thinking, and yes, I just laughed out loud!!

WONDERFUL!
Thanks for joining us!
peace,
lori

That is too funny! At least they are eager to help out even if it is with poop!

The Message is such a great version. What a fun and great post.

They can scoop all the poop they want! LOL...

What a great way of spending time with them, teaching them important Biblical principles of working cheerfully while you are building your sweet family memories, and including encouraging Bible verses throughout - and the Message Bible is so easy, it's a great one for our children and grandchildren! Have a blessed Word-Filled Wednesday. :)

They are cute. God help us to share your Word with our loved ones.